Sign Up For Our Newsletter
Thursday January 27
Open 10am – 5pm

cruiser olympia and the unknown soldier

Centennial Anniversary of the Journey Home

“The burial of the Unknown Warrior should give the whole country an opportunity to express in a National way, their tribute to the glorious dead. It will bring consolation and assuage the grief of the twelve hundred families whose sons died unknown and unidentified, for each and every family will proudly claim this by as that of their own son.”

One lone soldier’s remains were selected to symbolize the nation’s indebtedness for all United States service members who died in combat.  Congress authorized the establishment of the Tomb of the Unknown Soldier in 1921 as a memorial for the thousands of American families whose loved ones were lost and never identified as a consequence of World War One (While the United States’ involvement was brief, the cost was severe. There was a recorded 116,708 American deaths, with 3,350 of them missing or unidentified).

The Tomb of the Unknown Soldier remains a timeless place for Americans today to reflect on the personal costs of duty and sacrifice in preserving freedom in the world.  2021 marks the Centennial Anniversary of the American Unknown Soldier from World War One’s transportation home from France to the Washington Navy Yard.  But what some people may not know is the story behind the selection of the Unknown Soldier and the perilous journey aboard Cruiser Olympia as she made her way across the Atlantic Ocean.  And the brave men who risked their lives to protect the soldier they, nor the nation, would never know.

Selection of the Unknown Soldier

On March 4, 1921, Congress approved the burial of an unidentified American soldier from World War One in the plaza of Arlington National Cemetery’s new Memorial Amphitheater.  The journey of the World War One Unknown to Arlington began in France in September 1921 when four American bodies were exhumed from unmarked battlefield graves.  U.S. Army Sgt. Edward F. Younger (a World War I veteran who was wounded in combat and received the Distinguished Service Medal) selected the Unknown Soldier from among four identical caskets at city hall in Chalons-sur-Marne, France.  […] the chosen casket was then transported to Washington, D.C. aboard the Navy cruiser USS Olympia.  Those remaining in France were interred in the Meuse-Argonne American Cemetery.”3 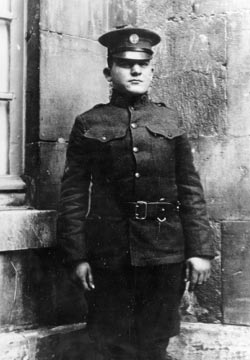 Why was Cruiser Olympia selected for this mission?  Due to the public’s continued recognition of Olympia’s fame as a flagship during the Spanish American War, her selection was seen as a “fitting tribute to the American patriots who died on the battlefields of Europe.”  But, it was also a matter of convenience.  With the determination that the expense of using an older, smaller ship was “negligible,” it was deemed advantageous to use a warship like Olympia. 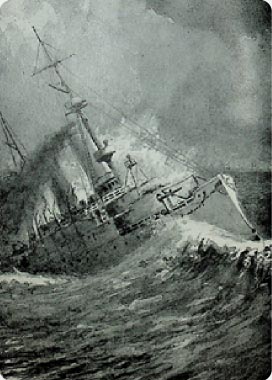 Cruiser Olympia (CL-15) left Le Havre, France on October 25, 1921, with not only a full crew but also with a Marine Detachment Unit whose duty it was to guard the Unknown Soldier until they safely arrived in Washington, D.C.  For the crossing, the casket containing the remains of the Unknown was placed within a larger transport container for protection.  Due to the size restrictions of the doorways aboard Olympia, the crew was unable to move the case below deck without disturbing the remains inside.  This meant that the remains had to be stowed topsides in the relatively most secure location just below the aft signal bridge and radio house for what would become a turbulent crossing.  Ship Captain H.L. Wyman, Olympia’s Commanding Officer, ordered Captain Graves B. Erskine, Commander of Olympia’s Marine Detachment, to command his Honor Guard to watch the Unknown Soldier around the clock.  To keep the transport case safe, it was lashed down securely as possible to prevent loss.

While sailing westbound, Olympia encountered the remnants of “Hurricane #5” and “Hurricane #6,” also known as the ‘Tampa Bay Hurricane’ of 1921.  Both had crossed Florida within a week and continued to track (albeit it weakened) into the North Atlantic Ocean in Olympia’s direction.  These combined tropical storms subjected Cruiser Olympia, the crew, and the Unknown Soldier’s remains to ride 20 to 30-foot waves for 10 days, nearly two-thirds of the Atlantic crossing.

The cross-waves sporadically colliding with the ship’s sides were the biggest threat to Olympia capsizing and the potential loss of the Unknown’s remains.  Marine Honor Guard Frederick A. Laundry reported that the ship rolled 39 degrees – a mere 10 degrees away from being lost at one point.  He noted even the ship’s cook speculated how close she would come to capsizing on the next roll. Throughout it all, the intrepid marines who guarded the transport case heroically lashed themselves to the ship to prevent from being swept overboard.  As Erskine recalled later on:

We lashed the fellow down with everything that we could tie on him.  Many times the waves would go up the bridge…and in the wardroom, we had at least four inches of water most of the time…We had some very rough weather coming home, and there were times we thought we might not make it home.  The chaplain and the captain got together and he had a special service, praying to God that the ship wouldn’t sink.4

Landry was quoted as saying: “I began feeling sorry for myself standing there in a small area with wind and rain pelting me in the face, but my self sorrow didn’t last long.  I soon realized that what I was doing was little enough compared to what the Unknown Soldier had done – given his life.”5

Because of the bravery of those who were aboard at the time, the Marine Commander and his Honor Guard, Olympia’s commanders, navigators, boiler stokers, sailors, and stewards, the ship was able to weather the storm and deliver the Unknown Soldier’s remains safely to the Washington Navy Yard on November 9, 1921.  Upon arrival, the Unknown Soldier was taken to the Capitol Building and two days later to Arlington National Cemetery to finally be laid to rest as the cherished American Icon we know today.

Independence Seaport Museum has commissioned a new historical marker to honor the exact location as to where the America Unknown Soldier was laid during the transport home across the Atlantic Ocean in 1921.  There is a tradition of marking this place aboard Olympia as a site for reflection.

Earlier markers included a white bronze plaque measuring 10 x 8 inches (in the 1920s) and then a second interpretation by the Cruiser Olympia Association that included a reproduction of the original historical marker and represented the presence of the Unknown Soldier with a reproduction of a life-sized transport case similar to the kind that held the casket.

The new marker, which was unveiled during our Memorial Day Ceremony, honors the tradition of previous markers while also honoring not only the Unknown Soldier but the crew and honor guard aboard who so gallantly protected the Unknown’s remains with little thought for their own lives.  As can be seen from the rendering, this version will include a reproduction of the original marker from the 1920s (including its original font type) at a larger size to dominate the marker.  The bronze slab depicted represents the dimensions of a casket, recalling the second historical marker. 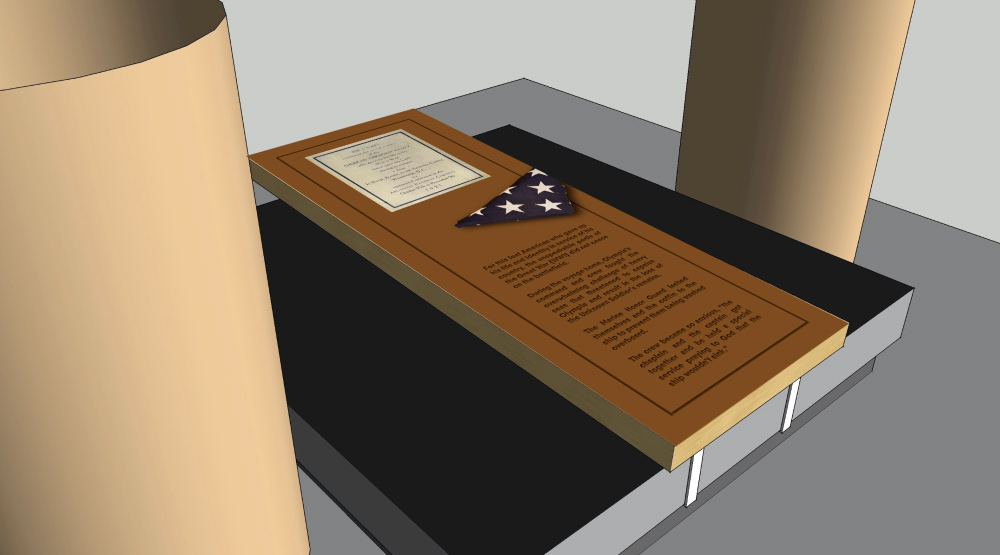 What Does It Represent?

The folded American flag represents the absence of the Unknown Soldier and the tradition of folding the flag (previously draped over the coffin) to be given as a token of remembrance to the family. This flag remains uncollected because the connection between this unidentified soldier and his family and friends has been broken.

Additionally, the following inscription will be present on the marker:

“For the American who sacrificed his life and identity in service of his country, the unspeakable perils of World War One did not end on French battlefields.  The journey of his mortal remains home to the United States aboard U.S.S. Olympia nearly ended in his loss at sea.

The Unknown Soldier’s safe return resulted from the bravery of Olympia’s crew, whose valiant efforts kept the ship functioning through heavy seas from ten of the voyage’s fifteen days.

It was on this spot that the Marine Honor Guard lashed the casket and themselves to the ship to avoid being washed overboard.”

Visitors are encouraged while on Cruiser Olympia to pause for a moment of reflection and to pay their respects not only to the crew and Unknown Soldier from the 1921 journey but all those who serve and who are currently serving to protect our freedom and country.

As stewards of National Historic Landmark ship Cruiser Olympia, Independence Seaport Museum proudly partners with the Society of the Honor Guard, Tomb of the Unknown Soldier (SHGTUS)’s Centennial Committee, and others in solemn commemoration as we honor the Centennial Anniversary of the Unknown Soldier’s journey home to his final resting place. Throughout 2021, we will honor this anniversary by sharing stories, presenting programming, hosting discussions, and premiering digital content highlighting not only the Unknown’s journey home, but how important the concepts of home and loss are as it relates not only to civilians, but also veterans, active-duty military, and military families.

On Memorial Day Weekend 2021, the Museum opened a special temporary exhibit aboard Cruiser Olympia.  Discover the dramatic story of Olympia’s historic transport of the Unknown Soldier across the Atlantic Ocean in Difficult Journey Home.  This exhibit will serve as a way for us to start to examine the perilous journey of the past while understanding the perilous journeys of the present and future.

During the annual Memorial Day Ceremony, the Museum unveiled a historical marker to commemorate the memory of the Unknown Soldier and preserve the story of his journey home for future generations.  On October 25, 2021, ISM will host a joint ceremony with Le Havre, France in honor of the Unknown Soldier’s departure aboard Cruiser Olympia and partake in a second event on November 9, 2021, to commemorate his safe return home.

Donate at the button below to support Independence Seaport Museum’s commemoration of the Centennial Anniversary of the Unknown Soldier’s journey home aboard Cruiser Olympia and to guarantee this story is preserved for future generations. 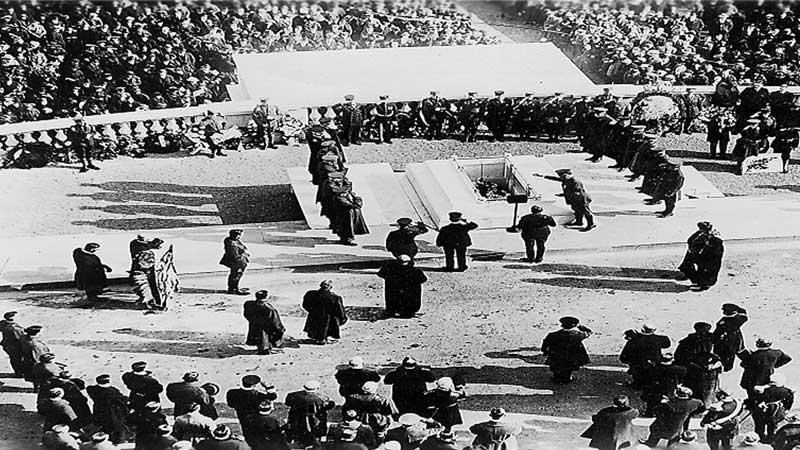 For more information on the Tomb of the Unknown Soldier: https://www.arlingtoncemetery.mil/Explore/Tomb-of-the-Unknown-Soldier

For more information on the Society of the Honor Guard and the Centennial Celebration: https://tombguard.org/centennial/